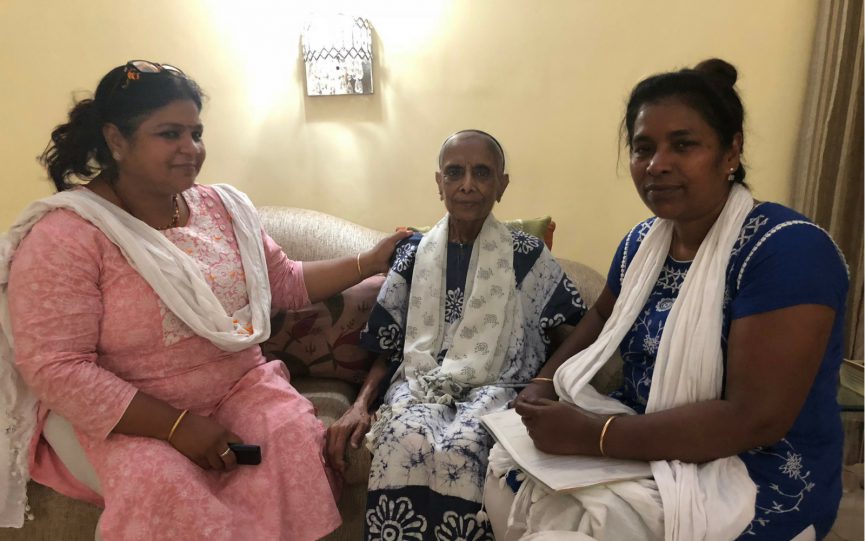 “When life gives you lemons, make lemonade,” Santosh says, as she smiles at me. I smile back. At 76 years old, she has accomplished everything she wished in her life, from being a lawyer for many years to a mother of two. When I walk into her home, I am greeted by a smiling lady with a handful of orange flowers. She stretches her hands above my head and disperses them on my head.

For the last six years of her life, Santosh has been fighting breast cancer. When she was diagnosed in 2012, the initial shock of sickness and the time consumption of treatment pressured her to leave her law practice. And for the next six years, she lived with a sense of fear and sadness. Multiple metastases caused progression of this disease into the lung and liver, and fighting became harder and harder. In May of 2017, she began speaking to CanSupport’s Home Care program, and started to build a strong bond with the Home team counselor, Renu.

Renu described her first visit with Santosh as – “…..there was a lot of sadness, crying, and grievances. Santosh had been undergoing chemotherapy for a while now, and the physical weakness it caused was catching up to her spirit”. Recognizing Santosh’s desire to be heard, Renu knew that what she needed was not advice, she needed a listener.

Renu gives Santosh a hug. “How are you?” she asks and they smile at each other. Sitting down on the couch, they share her concerns. Santosh begins by talking about her experimental treatment, and how much pain it has inflicted on her. She talks about her daughter-in-law, and how she is hoping she would bear a child. She talks about her son, the professor, and her daughter, the lawyer. And she talks about how she loves them. Renu listens attentively all the while.

Though it is only my first interaction with Santosh, I could see her stresses being relieved as she voices her worries.

Santosh turns to me and tells me to enjoy every minute of my life. She tells me that she is unafraid of death. She tells me all of this with the most serene and assured voice.

As we leave for the door, I look back and smile at Santosh. “Namaste,” I say as I hug Santosh and we head out of the house.

“Do you know why she shared those flowers with us?” I ask Renu.

“They were blessings,” she replies.

From her first visit to now, Santosh has turned her tears into flowers and grievances into blessings.