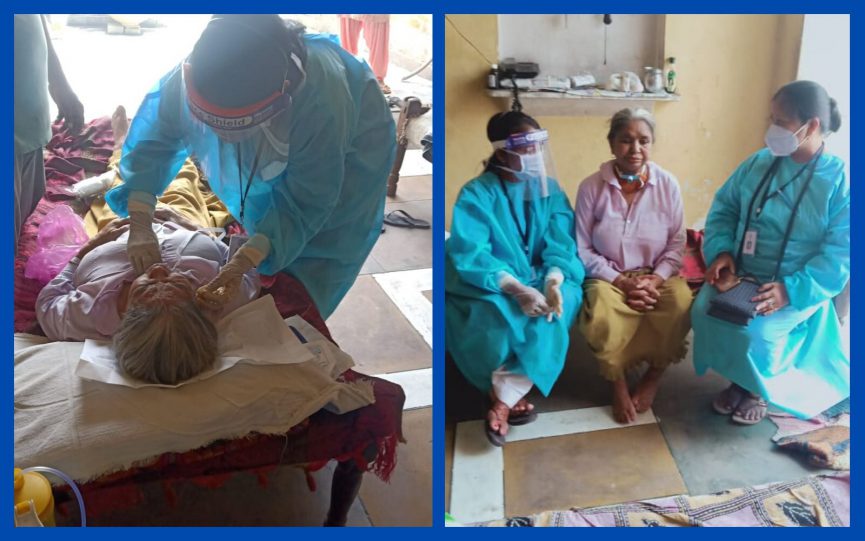 This is the story of Ritu, a brave cancer warrior who fought bravely till her last breath. Ritu was detected with cancer in October 2019. Unfortunately, when cancer was detected she was already in fourth stage. Ritu used to work in a cloth factory as a housekeeper. Ritu’s husband worked as security guard but due to alcohol addiction he lost his job. They have a daughter who was married and lives in Agra.

After getting to know about Ritu’s diagnosis, her daughter decided to come to Delhi to stay with them. She became her mother’s full-time care giver since her father was alcoholic. Ritu’s daughter Sarika heard about CanSupport while she was waiting for her mother’s chemo in Rajiv Gandhi Cancer Hospital. She also met the social worker their and decided to enrol her mother for CanSupport’s Palliative Care service.

The team started visiting her mother once every week to check on her and provide them medicine to manage her symptoms.

The news of lockdown hit the family like a thunderbolt. Due to side effects of the chemo Ritu had developed a wound at the back which got so bad that they were maggots in the wound. The smell and pain made Ritu so uncomfortable that she was not able to sleep. The pain was so excruciating that even neighbours got worried. Due to lockdown most of the OPD was closed and with no transport Sarika was having trouble to take her mother to the hospital.

The CanSupport team paid her a visit and the team nurse did the dressing and removed the maggots. Since Ritu was in pain the doctor gave her morphine to ease her pain. Sarika informed the counselor that, she was so relieved to see her mother sleep in peace that night.

Due to the lockdown, home visits have been curtailed to only attending high priority cases so the team counsellors are regularly calling their patients and caregivers to give psychosocial support and to check if they need the team visit.

Sarika often spoke to the team counselor and shared her concern and fears. She used to complain that her father was not serious about his wife’s health and still urged for alcohol. She also shared that she doesn’t want to see her mother suffer like this every day. Sharing these concerns with the team counselor often helped Sarika vent out her frustration.

Ritu also shared her concern about being dependent on her daughter. She was also worried about Sarika because she had left her family back in Agra to take care of her. However, the counselor comforted her by assuring her that everything would alright at her daughter’s home. She had requested Sarika to also make her husband speak to her mother when he called because that would give her comfort.

Ritu’s husband initially didn’t like the team visit since he felt that his wife always complained about him to the team. But, gradually seeing changes in Ritu’s condition and seeing how the team was taking care of her, his perception changed. The counselor also tried to speak to him about his wife’s condition and the role he was to perform being her husband. Talking to him really helped him control his urge for alcohol.

Ritu died on 30 April 2020. Sarika informed that her mother died peacefully. She was really grateful to the team for the help they provided to her in this difficult time.

(Picture in display is representation of CanSupport Home care Services)

They are many people like Ritu who need palliative care but they don’t know where to go. While CanSupport is doing its best the reach out to people informing them about their services, we request you to spread the word. Share our Helpline Number 011-41010539 with to all the needy people. Though all CanSupport services are free of charge for patients, the cost of reaching out to patients and caring for them cost Rs. 1300/- per visit per patient.

If you would like to support our cause, please donate at https://cansupport.org/donate

Patient names have been changed to protect their identity.