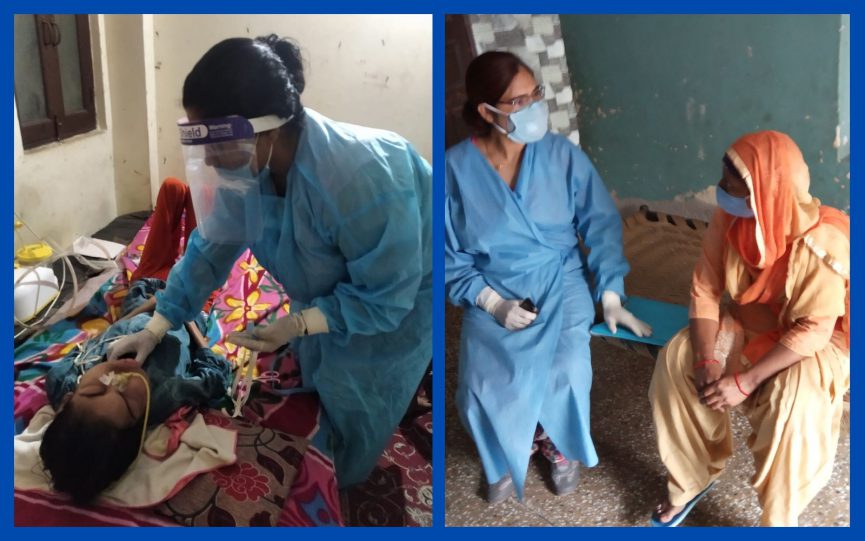 Poonam Devi was a 51 years old female diagnosed with ovary cancer. She lived in Meerut where her husband had a small grocery shop but later it was shut down due to lack of money. From that point, the family started facing more financial problems. Her husband was her care taker but he wasn’t able to take care of her due to his deteriorating health. After failing to get the best treatment, a new door of hope was opened when her son and daughter invited her for treatment in AIIMS. After shifting to Delhi with her husband, her daughter became her main caregiver.

CanSupport’s team called them after getting the referral from AIIMS helpline. After getting the referral, CanSupport enrolled Poonam for home care. On their first visit to Poonam’s home, they found that she was in pain and discomfort. The doctor reviewed her report and health and gave her some medicines to manage her pain and symptoms. Her pain was relieved in a span of two days.

The first phase of lockdown was announced due to COVID-19 pandemic soon. During the lockdown, she developed severe breathlessness. Since mobility was restricted due to curfew, the teams were initially restricted to do a home visit. Therefore, the team immediately advised her daughter to take Poonam to the hospital. After keeping Poonam for two days in the ICU, doctors told them to take her home.

Back at home, her daughter was put in a challenging situation: managing Poonam’s symptoms alone was very difficult, and even CanSupport’s Home Team was helpless due to their inability to visit most patients at that point in time. In this situation, her daughter had many conflicting emotions - a justified anger towards the hospital for refusing to keep her mother in their care, and her worries about managing this situation alone.

When Poonam’s daughter called CanSupport, the team helped her understand the reason that her mother had to be discharged from the hospital. Due to Poonam’s already weak immune system, it would be extremely unsafe for her to be in an environment where COVID-19 was rampant. CanSupport’s suggestion to help Poonam’s daughter was to shift Poonam to Shanti Avedna Sadan, thereby lessening some of the burden of her daughter.

Just as they were planning to move her from the hospital to Shanti Avedna, CanSupport and Poonam’s family received a shock: Poonam took her last breath in the ICU. The entire team was speechless - one moment they were arranging her transfer to Shanti Avedna Sadan, and the next moment she died. However, even during this bereavement period, the CanSupport team knew how important it would be to provide support to Poonam’s family.

In fact, once the time came to perform the last rites for Poonam, her family faced an even more complicated issue due to the lockdown. All religious places were closed and even pandits were unavailable for doing the last rituals. Moreover, no member from her extended family could come to Delhi and express their grief.

In this complex situation, the team had two options for Poonam’s family: either they could have online rituals done by a pandit or they could go to the Bangla Sahib Gurudwara, which was the only religious place that was open during the lockdown. Since reaching the Gurudwara would be difficult, the family found the online option more suitable, and all the rituals were done successfully by the pandit online.

Regardless, the family’s grief over Poonam’s sudden death and their helpless and inability to perform the rituals properly continued to trouble them. CanSupport’s counselors emotionally supported the family over the telephone to help them manage the trauma of Poonam’s death. With CanSupport’s reassuring words, the family has become better over the past few days and extended their “warm hearted thanks” to the entire team.