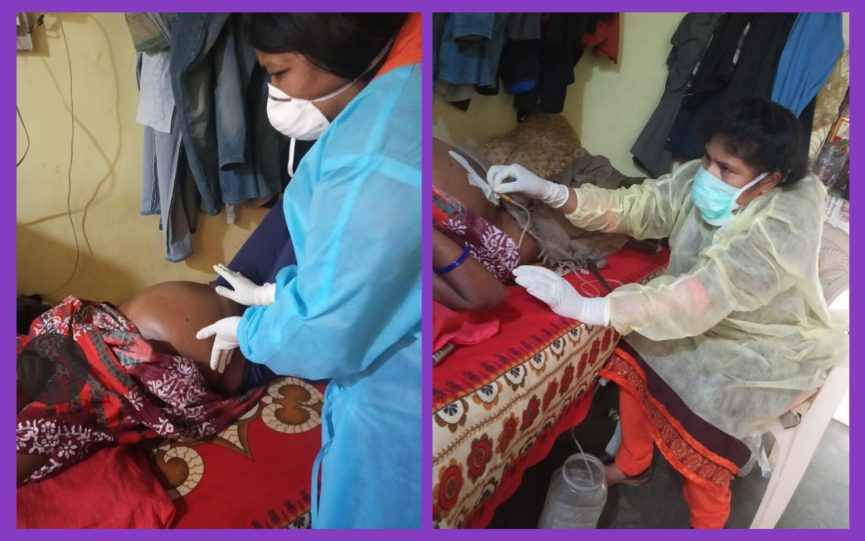 This is the story of Rupam Devi (name changed), aged 48 years, who was in her last stage of cancer. Since there was no scope of curative treatment the doctors had advised her family to take care of her at home. Her family got to know about CanSupport through her doctor who suggested that we can help them in taking care of the patient. Her family approached CanSupport on the doctor advise and got her enrolled on our Home Care Program. The team used to visit her once a week to check on her condition.

On March 24, 2020 when the national lockdown was announced owing to the CoVID Pandemic, the team got a call that Rupam has developed severe breathlessness due to abdominal swelling. Since there was no transport available, they were unable to take her to the hospital. Seeing Rupam’s condition was making her family members anxious.

The next day CanSupport team comprising of Dr. Santha and Nurse Mini Sebastin visited Rupam. When they saw Rupam, she was feeling very breathless, her abdomen was swollen, and on examination there was suprapubic fullness. The team nurse inserted a Foley’s catheter, with utmost precaution and drained the urine. Rupam was also suffering from constipation so a manual evacuation of faecal matter was done. She however continued to feel breathless, hence the doctor suggested the nurse to do ascitic tap procedure at home and about 1500ml of Ascetic fluid was drained. After the procedure Rupam felt very relieved and could drink some juice. The doctor prescribed some medicine and also provided the medicines for Rupam that would give her some relief. After few days, the team called Rupam to check if she was facing any difficulty, however she had no problem.

Few weeks after, the team received a call that Rupam was feeling nausea. The team visited her and after doing routine check-up the doctor gave her medicine. On April 15th the team received a call that Rupam had passed away peacefully at home. The family expressed their gratitude to CanSupport for stepping in and providing emergency care at home at a time when everybody is gripped with fear.