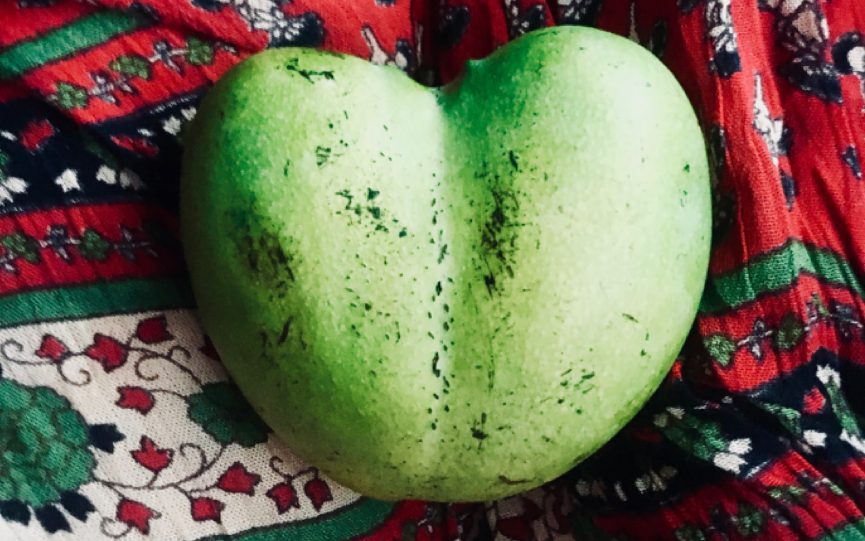 As we were leaving, the son stopped me and handed me a mango which had grown in the shape of a heart. He said, “it is a present from India”.

When I was told I would be going with the doctor and nurse to do homecare visits, I was both apprehensive and excited. I was not sure what to expect but I was interested to see what the day would bring.

We visited 4 different household, each one with an incredibly interesting story and each one having huge appreciation and respect for what CanSupport has done for them since cancer has become a part of their lives.

The first family we visited were receiving their first homecare visit from CanSupport. I was amazed at the small room the family of five were living in, with two beds, a fan and a small stove outside, the family did not have much else. I could see how the family were really struggling since the father has been bedridden for the last 8 months.

As the doctor and nurse described the services CanSupport would be providing for the family, I could see the relief the family felt as they broke down in tears. Although the entire conversation was in Hindi (and I do not speak any Hindi), I could see how the care and empathy the nurse and doctor showed really comforted the family. For the first time they realised they were not alone.

One thing I noticed during all the visits was how the doctor always made an effort to sit next to his patients; he hugged them or held their hand. Afterwards he told me “it is important to me to hug people and to hold their hand because it shows them that someone cares”.

At home, I am so used to doctors being so ‘professional’ and serious that they rarely show this level of genuine care for their patients. I could see the difference this simple touch made to the patients and their families. Not only was the doctor saying he cared but he physically showed them that he cared.

I also met a breast cancer survivor who has been cancer free for one year now. She told me how grateful she is to CanSupport for the work they have done since her diagnosis, for both her and her family. I could see the relationship between her and the team was strong and that she still really valued their visits, despite being cancer free. The relationships the team build with their patients are genuine and long lasting.

The final family I met were the only family who were able to speak English with me. The woman had been diagnosed with breast cancer and her son was her main caregiver. Her son spoke very good English and showed me the amazing artwork his friend had drawn of his father who had passed away a few years ago. He told me that this friend had since died of cancer and that had made it hard for him to cope with his mother’s diagnosis.

The doctor and nurse laughed and joked with the family and also listened to their issues and worries. The team provided psychosocial and emotional support for the entire family. You could feel the atmosphere change and become more relaxed the longer the team stayed.

As we were leaving, the son stopped me and handed me a mango which had grown in the shape of a heart. He said, “it is a present from India”. I was amazed at the generosity of the family who had so little and yet because they appreciate the work that CanSupport are doing for them, they are so willing to show their gratitude however they can.

Going to home visits with the CanSupport team was an eye-opening experience for me. The work the team is doing is incredible and I feel privileged to be a small part of the operation that goes on here.