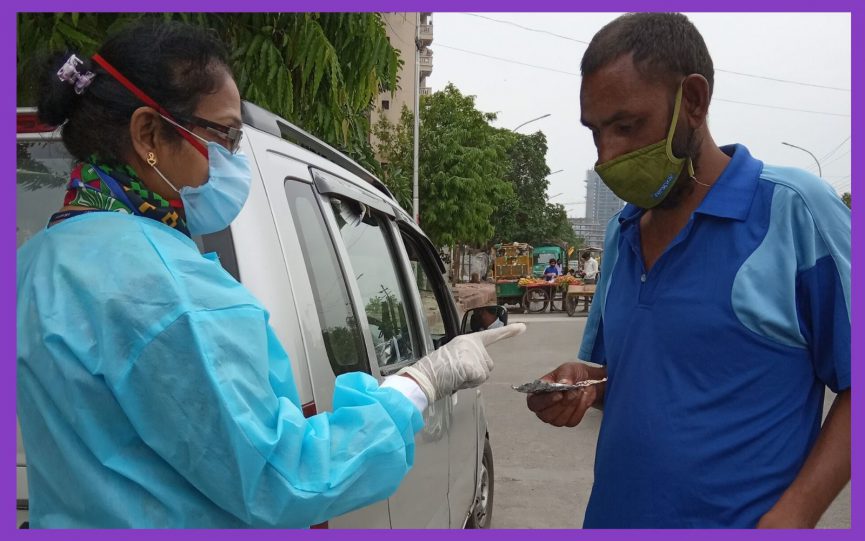 Koshiya is from Rampur, an eighteen-year-old girl suffering from CA breast that has spread to the bones. Her family isn’t economically very strong. Her father works hard to make two ends meet and get his daughter proper treatment, which entailed that he had to live away from his family in search of a fairly paying job.

Koshiya moved to Delhi on her aunt’s suggestion. She offered her to stay at her place in Seemapuri where she could be better taken care of as well as get treated in AIIMS.

Being a teenager fighting cancer has been extremely hard for Koshiya’s mental health. Adding to that the fact that she is well aware of her family’s condition and how her father has to work harder, staying away from the family to get them by and help her fight her disease. Though her aunt’s family is kind and takes good care of her she still has to live away from her father, mother and her little brother. While her parents try their best to appear strong to give her strength her little brother of course isn’t able to hide his emotions. He misses his sister and father and he is struggling with the fact that his sister has cancer. With the little understanding of the disease he thinks that her disease is serious and he is afraid that he might lose her.

While the family is struggling with the boulder life has thrown their way, the world is faced with pandemic which threatens to wipe out majority of the human population, if proper steps aren’t taken to stop the Corona virus from spreading. When the lockdown was announced Koshiya was in Seemapuri at her aunt’s while her father was working in Sambalpur Mandi.

During this lockdown period Koshiya was running out of her medication as no one knew that lockdown would be extended with the pandemic spreading. Her father wanted to travel to our east OPC to get medicine for Koshiya but since he had no prescription or Kosiya’s documents he was not allowed to travel. So, her father contacted CanSupport to help him. CanSupoort team helped him by convincing the police to allow him to travel to Seemapuri to collect required papers and prescriptions. Finally, Koshiya’s father reached Seemapuri and picked up the prescriptions and Adhaar Card for identification purposes and was able to collect the T-Morphine and medicines from the east OPC.

Throughout this episode he faced several obstacles as police officers used to stop him often for questioning on the purpose of his travel but with the help of CanSupport Home Care Team Dr. Smitha the police allowed him to travel.